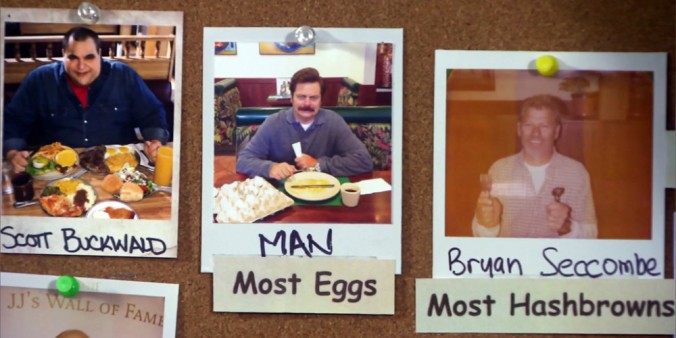 The Pawnee Rangers—a small Indiana city’s answer to the Boy Scouts—are led by one Ronald Ulysses Swanson. Their handbook is simple enough to remember, but harder to follow. It reads, in its entirety:

It seems easy, but the challenge lies in defining “man.”

For many, Swanson is the definition. He’s an “all the bacon and eggs you have”-eating Libertarian who hunts, chops wood, sleeps with seemingly any pretty, dark-haired woman he desires, and can grow a full beard overnight. He’ll punch another man in the nose and then tell him to put his tears back in his eyes, where they belong.

But is that the whole picture? Swanson will also shed a tear at the sight of a miniature, marshmallow-based figure of himself. He has been seen sporting a princess tiara and a full face of makeup. A man who could be his twin is jazz saxophone legend Duke Silver. Ron Swanson was even named Pawnee’s Woman of the Year.

While many of Swanson’s distinguishing features are lifted from the life of the actor who portrayed him for seven seasons in Parks and Recreation, Nick Offerman rejects that definition of manliness.

“I think it’s old-fashioned—an old-fashioned sense of sort of a pugilistic, cigar-smoking, man that—to my way of thinking, that sensibility, on the surface, has a misogynist overtone. . . . I would be much more interested in breaking down those stereotypes because I love to bake, I love to sew—I’m a terrific seamster—and, you know, I have members of my family that are female that are much tougher than I am and they’re better at fishing and splitting firewood and can beat the crap out of me.” (The AV Club, 2017)

Offerman’s résumé as a television and film actor will forever be dominated by Swanson. Many of his other roles—both before and after Parks and Rec—are very manly. He plays plumbers, electricians, construction workers, a LEGO pirate, many different police officers, and, in one episode of The King of Queens, “The Man.” He doesn’t fear being type cast; a steady job means time spent in his wood shop or with his wife.

Offerman, unlike Swanson, has been married just once. He and Megan Mullally, who would later play Swanson’s (second) ex-wife, married in 2003 at their own pre-Emmy party. Mullally was a nominee for the fourth consecutive year for her role as Karen on Will & Grace; Offerman was three episodes into a recurring role on ABC’s George Lopez and his first of two appearances on Gilmore Girls.

“Our particular dichotomy is really great because Megan is 10, 11 years older, and she has hit all these high water marks that I’ve watched as she handles these things and gracefully surmounts all these hurdles. Now, unbelievably, I’ve come to some of the same places. There’s a real open student-teacher relationship where Megan is years ahead of me as far as the work she’s done and was on top of the game long before I was. It’s like having a master teacher at home.” (Back Stage, 2011) 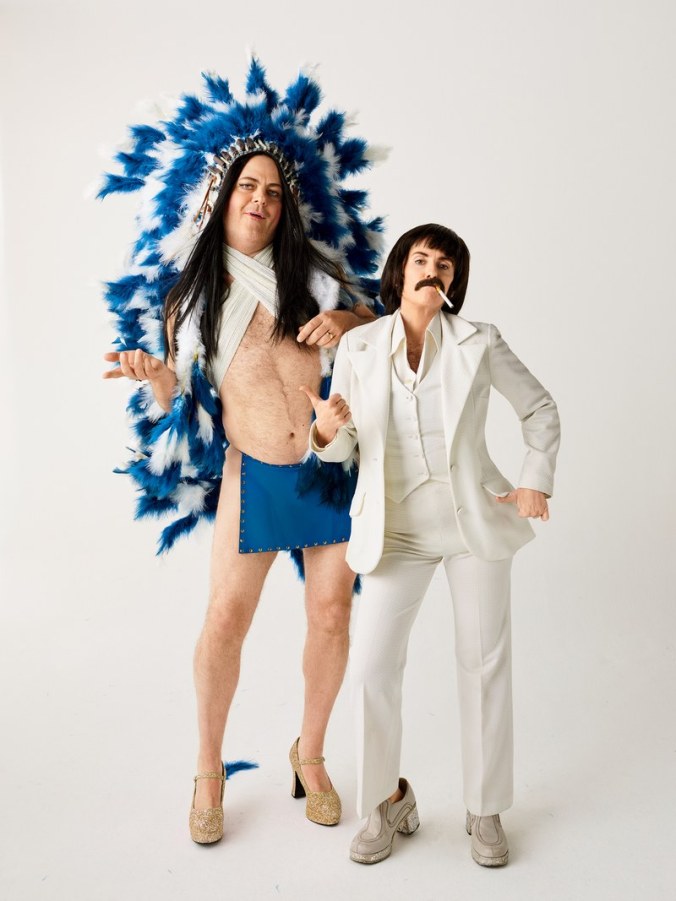 What are Nick Offerman’s rules for being a man? With three books, a Netflix special, and a popular Twitter account, he has become one of the internet’s favorite sources of wisdom, yet many seem to strive to emulate Ron Swanson, for good and for bad, instead.

Rule number one: Take a bite of steak.
Rule number two: Wash it down with some whiskey. Preferably single-malt Scotch.
Rule number three: Find a socialist and punch him or her in the face.
Rule number four: Hand craft a small wooden boat. Out of cedar, preferably. Obviously.
Rule number five: Make love to a partner of your choice—preferably someone who is accepting of your advances—and upon climax, withdraw your firearm and unload some rounds, laced with double entendre, into the night sky.

That’s what people think I’m going to say, but what I would really say is just stand up for your principles and be loyal to your friends and family. (Conan, 2014)

Offerman outlines 21 of his role models in “Gumption: Relighting the Torch of Freedom with America’s Gutsiest Troublemakers.” Among the likes of George Washington, Frederick Douglass, or the very Swanson-like Theodore Roosevelt are Yoko Ono, Carol Burnett, and Conan O’Brien. He rejects the “John Wayne” definition of manliness, which suppresses emotion and encourages violence.

“If you live your life openly with your emotions, that’s a more manly stance than burying them.” (Men’s Health, 2017)

While Swanson takes a more personal approach to equality—in that he will treat everyone with respect, but would prefer not dealing with anyone at all—Offerman’s transition from small-town Illinois to small-city Illinois to Chicago, and eventually, Los Angeles, brought with it a recognition that all people are not treated equally.

“In the theater we learn pretty quickly that we represent everybody. That’s when it started to occur to me, when I left my small town in Illinois of white people and I got to the metropolis of Champaign-Urbana, Illinois and I immediately saw people being discriminated against, and new friends in the theater department who were going through the trauma of coming out to, say, their families.” (TIME, 2015)

With Mullally, Offerman was a vocal supporter of same-sex marriage. Offerman Woodshop, where Offerman and a group of skilled craftsmen—and women—build everything from mustache combs to canoes, also hosts Would Works, a Los Angeles-based organization that provides woodworking jobs to the homeless or people living in poverty in exchange for credit that can be used for rent, eyeglasses, or any one of the individual’s needs.

So eat your steak; drink your whiskey. Stand up for people who need it. Laugh at yourself. Cry, because you’re happy or because you’re sad. Be the things you admire about Ron Swanson or Nick Offerman… or Carol Burnett or Eleanor Roosevelt.

Next week we take a Brooklyn-bound D train to examine Brooklyn Nine-Nine’s Sergeant Terry Jeffords and the man who brings him to life, Terry Crews.